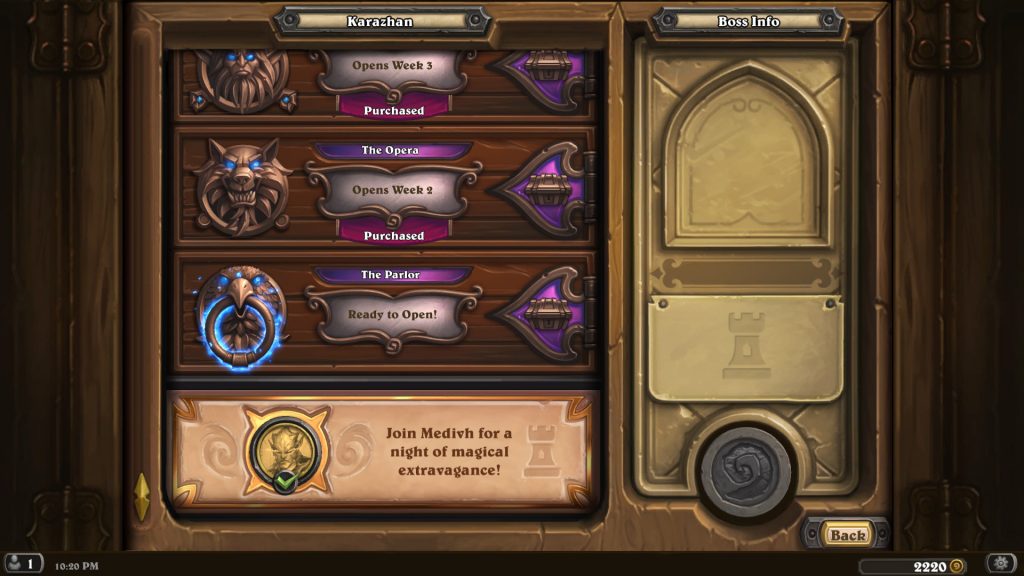 As if things weren’t bad enough, Medivh is nowhere to be found, so your job is to make your way to the top of the tower, which might sound easy in theory but a little bit to achieve if you’re well prepared. Most of you already know by now that the adventure features 13 bosses, spread across four wings and an introductory wing called prologue. Then there’s there’s the Heroic mode and two class challenges. It’s worth mentioning that the introductory wing is available to all players for free, with the others purchasable for gold or real money.

Players will start their journey to the top of tower in the Prologue and the first boss they’ll encounter is Prince Malchezaar. It’s one of the easiest fights, even if it might look impossible at first glance. You will use a predefined deck offered to you by Medivh, so expect some really powerful magic cards inside (+5 spell power and 0 cost spells, yes please). I personally liked the 1-mana Astral Portal that allows you to summon a random Legendary minion. You will receive two cards after defeating this boss: Enchanted Raven (one of the best 1-mana druid cards) and Firelands Portal. As soon as you’re finished with Prince Malchezaar, the real adventure starts. The first wing of the One Night in Karazhan adventure gives you 9 new cards, but only after you have defeated the three bosses that roam The Parlor: Silverware Golem, Magic Mirror and Chess (Black King). 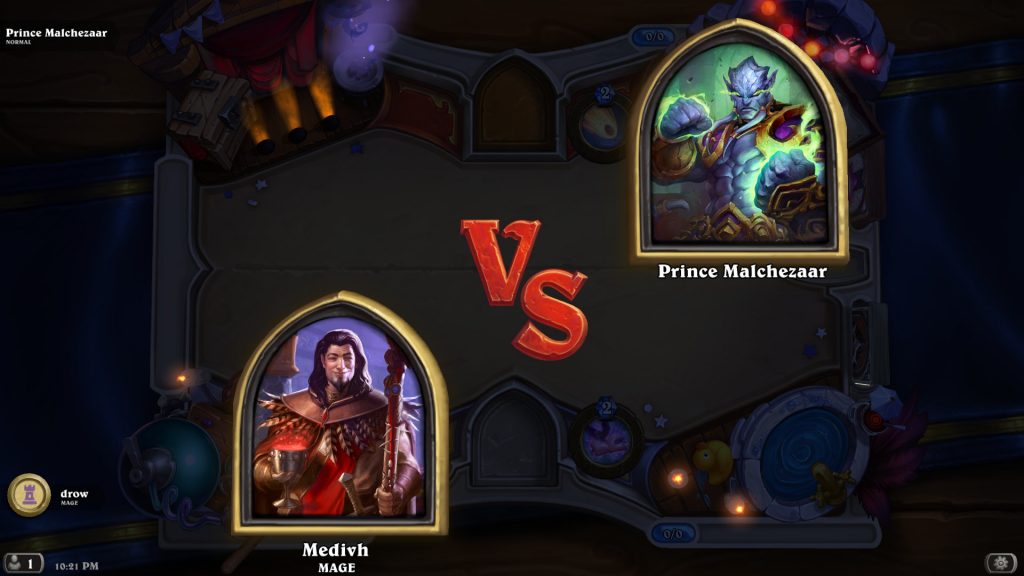 The Silverware Golem will try to overwhelm you with waves of plates, knives, forks and … cups. Yes, you read that right. Even though they don’t look that threatening at first, things can quickly escalate if you don’t have a handful of AoE removals. Upon defeating the Silverware Golem, you will receive two cards: Deadly Fork and Silverware Golem. The Magic Mirror has a very interesting passive power that allows you to plan in advance: whenever a minion is played, summon a 1/1 copy of it. However, on Hero mode, for each minion played, a 1/1 copy will be summoned for the Magic Mirror only, so make sure you change strategy when you play on this mode. Shattering the Magic Mirror will win you two more cards: Arcane Anomaly and Pantry Spider. 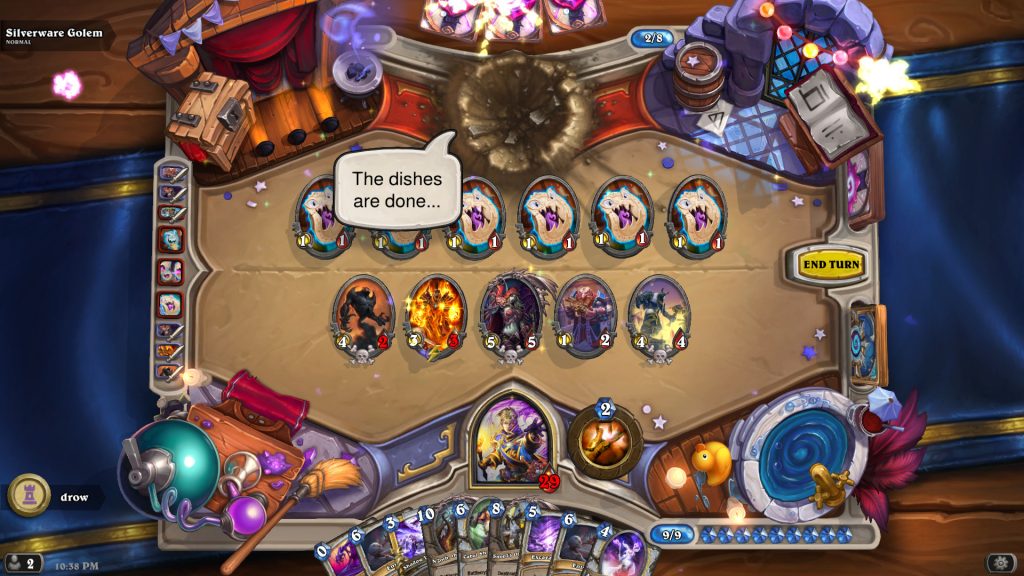 The last boss in The Parlor is called Chess. Basically, you will battle the Black King with a predefined deck featuring chess pieces. This boss fight is a tribute to World of Warcraft’s famous chess event in Karazhan, which allowed players to reach Prince Malchezaar upon completion. In this fight you’ll have to worry more about positioning than drawing the right cards at the right time. There aren’t any spells in the deck and the chess pieces you’ll be playing will attack on their own at the end of your turn, except for those that have Charge. Beware of the Black King’s passive power (destroy the left-most enemy minion)! Although the fight might seem confusing at first, you’ll soon get the hang of it. Two new cards will be added to your collection after defeating this boss: Ivory Knight, Protect the King!

After clearing The Parlor you will receive three new cards: Arcanosmith, Cloaked Huntress and Moroes (legendary). Two class challenges for priest and and shaman classes will also reward you with two new cards: Priest of the Feist and Maelstrom Portal. Overall, you will get 11 new cards by defeating all bosses in this wing and completing both class challenges. You’ll get two more from The Prologue after beating Prince Malchezaar. 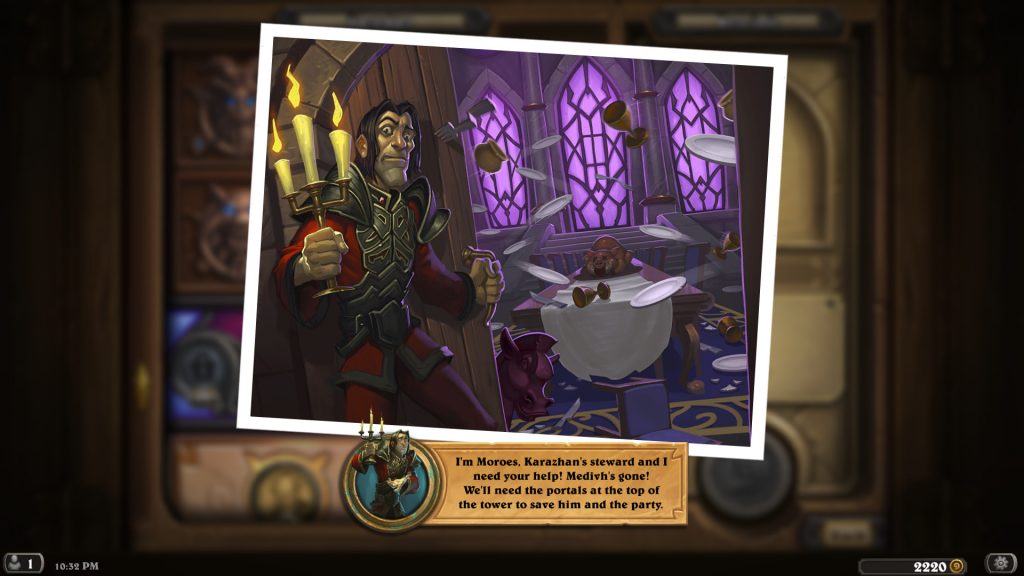 Since this is a new adventure and not another expansion, no new game mechanics have been introduced. However, I’m curious to see whether or not the metagame will change after all new cards are released. I’m pretty sure about one thing though, priests will continue to suck due to lack of good enough cards. Game mechanics aside, One Night in Karazhan is a well-designed adventure that can bring back some memories to many World of Warcraft fans. I’ll continue my journey to the top of the Karazhan tower next week, but until then check out the video below if you want to be prepared for The Parlor.